The war in Ukraine will slow down the catching up

The economy was particularly affected by the pandemic, due to its dependence on the tourism sector (17% of GDP, 50% of services exports in 2019), whose recovery remained limited in 2021 with still 62% fewer foreign tourists than two years earlier. Thus, at the end of 2021, while the Eurozone had recovered to its pre-crisis GDP, Portugal's was still 1.4% lower. In 2022, the rebound in activity will be slowed by the economic consequences of the war in Ukraine. The sharp rise in commodity prices will lead to a marked acceleration in inflation, which will spread to all products and remain high throughout the year. As purchasing power declines, household consumption should slow sharply, as uncertainty will not encourage households to draw on savings built up during the pandemic (10.9% of gross disposable income at the end of 2021, compared with 7% before the crisis). The conflict will also have a major impact on businesses through, on the one hand, the worsening of supply difficulties, which had already hampered industrial activity in 2021, particularly in the important automotive sector (15% of goods exports in 2019) and, on the other, the surge in production costs, which will lead to a contraction in margins and profits. Therefore, in this adverse environment for business confidence, investment is likely to remain limited. Despite limited trade with Russia - which accounted for 0.3% of exports and 1.3% of imports in 2021 - the economy will also be impacted through the foreign trade channel, since 71% of its exports go to the rest of the European Union (76% when including the UK) markets, where demand will slow sharply. Despite these numerous headwinds, activity should nevertheless be driven by the rebound in tourism, provided that the health situation does not deteriorate - a scenario that cannot be ruled out in view of the increase in COVID-19 cases in some European countries in early spring. Investments in energy transition, infrastructure and digital transformation will also support growth, as the country is one of the main beneficiaries of EU funds, with EUR 13.9 billion in grants (6.5% of 2019 GDP) - plus EUR 2.7 billion in loans - for the period 2021-2026.

Forced halt in the improvement of public and external accounts

The consolidation of public finances that began in 2021 is expected to come to a halt in 2022, due to the additional measures taken by the government to limit the effects of the crisis on household and business finances (fuel price discounts, energy tax cuts, allowances for low-income households, new guaranteed loans for energy-consuming companies). The country's high level of debt will limit its fiscal leeway. This is all the more true as its financing costs will continue to rise in 2022, insofar as the ECB has announced that it will stop its net asset purchases in the third quarter, before, if the environment allows, raising its deposit rate at the end of the year.


After turning into a surplus in 2021, the current account balance is expected to return to a deficit in 2022 due to the strong increase in the energy bill. While the balance of goods is structurally in deficit (7.6% of GDP in 2019), the balance of services (8.4% of GDP), fuelled by tourism revenues, is largely in surplus. However, the expected rebound of the sector should not compensate for the surge in energy imports. On the other hand, the income balance is relatively balanced, with remittances from the Portuguese diaspora making up for dividends repatriated by foreign investors. In 2021, the country had the third largest net external debt in the European Union (81% of GDP), behind Cyprus and Greece.

After two years in power, the left-wing coalition led by António Costa (PS) did not survive the rejection of the 2022 budget - a first since the advent of democracy in 1974 - by its partners in the Left Bloc (BE) and the Unitary Democratic Coalition (CDU, union of communists and ecologists). At the beginning of November 2021, the President of the Republic, Marcelo Rebelo de Sousa, dissolved the Parliament and called early legislative elections for January 2022. These allowed the PS to obtain an absolute majority in Parliament with 117 seats out of 230 (9 more than in 2019), and enabled it to govern without the support of its former allies. The BE (5 seats, -14 compared to 2019) and the CDU (6 seats, -6) were the big losers in the early elections. On the other side of the political spectrum, while the main opposition party remains the PSD (centre-right, 76 seats), the main breakthrough was achieved by the far-right Chega party (12 seats, up from 1 in 2019), which has become the country's third political force. In this recomposed political spectrum, António Costa will benefit, for his third term, from a stability that was absent for more than a decade. .

Cheques are frequently used in Portugal and it is common practice to establish payment plans with post-dated cheques which are payable on presentation. If the bank account is not sufficiently provisioned, they are borne by the bank up to a maximum amount of €150. In the case of bounced cheques, an individual person or a company is prohibited from receiving or issuing further cheques for a maximum term of two years (or eventually six years, if there is a court decision).

Bills of exchange are commonly used for commercial transactions in Portugal. In order to be valid, they are subject to stamp duty, the rate of which is set each year in the national budget. A bill of exchange is generally deemed independent of the contract to which it relates.

Cheques, bills of exchange, and promissory notes offer effective guarantees to creditors against defaults, as they are legally enforceable instruments which entitle debt holders to initiate “executory proceedings”. Under this process, creditors can petition the court to issue a writ of execution and notify the debtor that this has been done. When debtors still fail to settle their debts, the creditors may request that the court officer issues an attachment order against the debtors’ property.

Electronic transfers via the SWIFT network are widely used by Portuguese companies and are a quick, reliable and economic means of payment. If the buyer fails to make a transfer, the legal recourse is to institute ordinary or summary proceedings, based simply on an unpaid invoice.

In the event of a payment default, creditors are not required to issue a protest notice before bringing an action to court, but such a notice can be used to publicise the matter and thus put pressure on debtors to honour their obligations, albeit belatedly.

Amicable collection begins with the debtor being sent four demands for the payment of the principal amount. Interest on the principal can be requested, but is normally difficult to collect in Portugal. Payment agreements subsequently made between creditors and debtors can include guarantees to ensure payments will take place as agreed.

Interest rates are set by the Treasury Department. The rates are published in the Diário da República during the first fortnight of January and July each year, and are applicable for the following six months. These interest rates are applied by default, unless the parties involved in a commercial agreement have contracted otherwise.

The order to pay procedure (Injunção), which is applicable to uncontested commercial claims, was established in March 2003. These proceedings, whatever the amount involved, are heard by the court in whose jurisdiction the obligation is enforceable, or the court where the debtor is domiciled. Since September 2005, these injunctions can also be served electronically.

The National Injunctions Office (Balcão Nacional de Injunções, BNI) has exclusive jurisdiction throughout the country for the electronic processing of order to pay procedures.

In cases of disputed claims, creditors can initiate formal, but more costly, declarative proceedings (acção declarativa), to obtain a ruling which establishes their right to payment. Once the claim is filed with the court and the debtor notified, a defence can be filed within 30 days. Failure to reply entitles the court to deliver a default judgment. If the judge rules in favour of the creditor, the court may order damages, if requested by the demanding party. They then need to initiate “executive proceedings” (acção executiva) to enforce the court’s ruling.

Under the revised Code of Civil Procedure, any original deed established by private seal (i.e. any written document issued to a supplier) in which the buyer unequivocally acknowledges his deb, is deemed to be an agreement that is enforceable by law. Since 2013, when the most recent revision of the Code of Civil Process was made, written signed payment plans can only be used to initiate executory proceedings when they have been recognised by a notary.

In the scope of the recent restructuring of Portuguese courts which has been ongoing since 2014, more courts specialising in commercial issues have been created. The number of Courts of First Instance has been reduced to 23 (in each district capital), while there are now 21 specialised courts (Secções de Competência Especializada) for commerical issues (secção de Comercio), commercial issues. These latter sections deal specifically with insolvencies and commercial company matters. During this same period, 16 sections specialising in Enforcement Procedures (Secções Especializadas) have also been created.

Enforcement of a Legal Decision

Once all avenues of appeal have been exhausted, a judgment normally becomes final and can be enforced. If the debtor fails to comply with the decision, the creditor can request compulsory enforcement mechanisms before the court – either through an Attachment Order, or by allowing payment of the debt to be obtained from a third party which owes money to the debtor (Garnishee Order).

A special extrajudicial administrative procedure (Regime Extra Juditial de Recuperação de Empresas, RERE) came into effect on July 1, 2017. This procedure for restructuring company debts is carried out by specialised mediators. It has been designed to enable creditors and debtors to reach a compromise, in a confidential and consensual manner.

The reforms implemented in 2012 included the introduction of a special rescue procedure (Processo Especial de Revitalizaçao, PER). The aim of this new procedure is to ensure the recovery of debts from debtors that are in a ‘difficult economic situation’ without starting an insolvency procedure. The management is obliged to request permission from the provisional judicial administrator in order to perform “particularly relevant acts”. During this process, the administrator prepares a recovery plan which must be approved by the creditors and a judge.

Insolvency law in Portugal also provides for insolvency proceedings (Processo de Insolvência). The main goal of these proceedings is to obtain payment for the company’s creditors through the implementation of an insolvency plan. Insolvency plans can be established under which the company is restructured and can continue to operate. Should this prove unfeasible, the insolvent’s estate is liquidated, and the subsequent proceeds are distributed among the creditors. 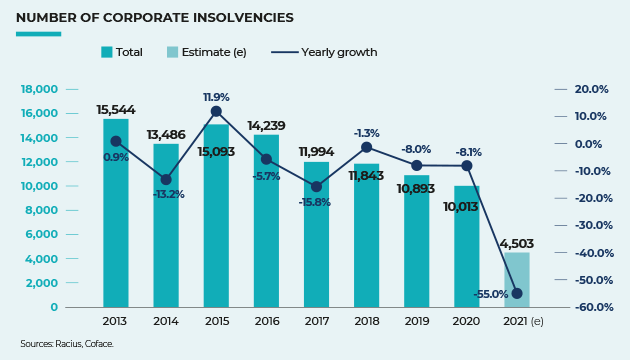